Dance energy for the new millennium and beyond!

headhunters are the crossover project for the 21st Century. The music is exciting, innovative, and celebrates dance culture from all over the globe.

headhunters live are stunning high-energy performers who have an excellent pedigree of clubs, live venues, raves and festivals. They are spearheaded by the original frontman, drummer and fiddle player from Celtarabia and also former members of Suns of Arqa so you can be guaranteed an incredible stage performance coupled with pure dance energy!

Joining Garbi Armii, Garry Low and Eddie Armitage are cello player David Hughes, dub/dance bassist Paul Holland (formerly of Definition of Sound), and, on the decks, DJ Usama, making a total of six core performers and an arsenal of instruments. 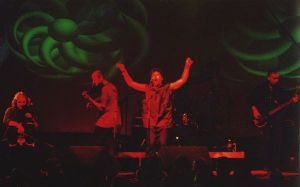 Feel free to mail us with any comments or questions, or if you'd like to receive news bulletins by email.

What's new on this site